The company said the game is the culmination of the adventure of main character Ezio, who becomes an Assassin after his father and brothers are murdered by a traitor to their family. The games take place in Italy, during the Renaissance period. The first screenshot, however, reveals a venue change, as Ezio is found in the ancient city of Constantinople.

First launched in 2007, the Assassin’s Creed franchise has sold more than 28 million games, and has branched out into a Facebook game, comic books, novels, a short film, and there are rumors that a full feature film is being developed.

“In Assassin’s Creed Revelations, master assassin Ezio Auditore walks in the footsteps of his legendary mentor, Altaïr, on a journey of discovery and revelation,” the company said in a statement. “It is a perilous path – one that will take Ezio to Constantinople, the heart of theOttoman Empire, where a growing army of Templars threatens to destabilize the region.

“In addition to Ezio’s award-winning story, the acclaimed online multiplayer experience returns, refined and expanded, with more modes, more maps and more characters that allow players to test their assassin skills against others from around the world. The latest chapter in the Assassin’s Creed saga also includes revolutionary gameplay, allowing players to manipulate the construct of Desmond’s memories and the Animus to decipher the mysteries of his past and gain insight into the future.”

The game will be previewed at the E3, Electronic Entertainment Expo next month inLos Angeles.

“Delivering the final chapter of the Ezio trilogy is an important milestone in the Assassin’s Creed franchise for us and for our fans,” said Alexandre Amancio, Creative Director at Ubisoft Montreal. “Assassin’s Creed Revelations includes lots of new features and some significant surprises. We can’t wait to show our fans what we have in store at E3 this year. 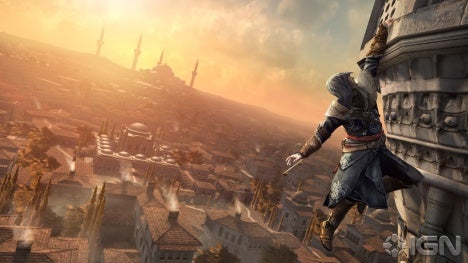 so this is the final game then?

so this is the final game then?
Click to expand...
No I think this game will follow the Brotherhood storyline . Ubisoft said Assassin's Creed 3 will feature a new character. I think they wanna release AC3 in 2012 to go along with the story.

i cant see this series getting boring UNLESS they really dont expand on the mechanics
Click to expand...
i dont know if this game could ever get boring unless the whole story took a turn or the characters/backdrops werent interesting

i never beat the first cause that shit was BORING. but the ending of the second took a whole turn for me....

Is this releasing this year with ACIII next year? I dunno if it's considered milking it yet or not, but I guess ACIII is being developed simultaneously as this and Brotherhood. I really would like to know how long this one has been in development. Do they have multiple teams/studios working on them?

maybe they are working on AC3 and having ideas that would be good for ezios/desmonds story before jumping into the third..i mean shit, what the fuck happened to the blonde chick? who were those voices? this seems like some star wars and these in betweens those clone war cartoons or something

AC:R....will complete ezio's story...lucy was still stabbed at the end of brotherhood and my assumption would be that abstergo/templars recaptured desmond and will put him to use...either they kill desmond pushing him to hard in the animus...or they kill him when the memories dont locate the apple of eden....hella ways this new game could play out...and only one thing is for sure right now is that its the end to ezio's story....AC3 will be a new chapter

just got my new Game Informer with ezio on the cover...has a 12 page article about the new game with a lot of pictures...i cant wait to take a dump to read it

LOL..thats where i get my GI reading done at

this game looks to be huge...they have like 6 Ubisoft studios all working together to make this game happen...that could be around 400-600 people working on this maybe more...

all the unanswered questions will be answered ( subject 16 ,lucy, desmond,altair, ezio

new weapon - the hookblade...looks like an attachment to the hidden blade

after this game will be AC 3

this is seeming to be like gta3 and gta 4 with vice city, libverty city stories and san andreas in between.. cant argue with that method

Damn that fighting was clean, I had to rewind that shit.