Ahh okay you were talking about man made laws. It all makes sense now

Yea nice going on the 420 posts talking to yourself, skitzo.

You are not me and I am not you therefore I am not talking to myself. Please return to your mother's basement and your fat 12 year old online gaming club chap.

datplaya said:
Click to expand...
Perfect contribution to the thread. Me, myself, and I goes perfectly along with the previous explanation of tantra and the meaning of OLYAN.

"In tantra, the whole can be seen and experienced in the partial; the partial is an expression of the whole" tatha brahmande, yatha pindande


85ers like you don't know why you do what you do but you still do it for the rest of the world's amusement.

The Kaaba (Arabic: ٱلْكَعْبَة‎ al-kaʿbah IPA: [alˈkaʕba], "The Cube"), also referred as al-ka`bah al-musharrafah (The Holy Kaaba), is a building at the center of Islam's most sacred mosque, that is Al-Masjid Al-Ḥarām (Arabic: الـمَـسـجِـد الـحَـرَام‎, The Sacred Mosque), in Mecca, Hejaz, Saudi Arabia. It is the most sacred site in Islam. It is considered by Muslims to be the bayt Allāh, the "House of God", and has a similar role to the Tabernacle and Holy of Holies in Judaism. Wherever they are in the world, Muslims are expected to face the Kaaba when performing salat (prayer). From any point in the world, the direction facing the Kaaba is called the qibla. 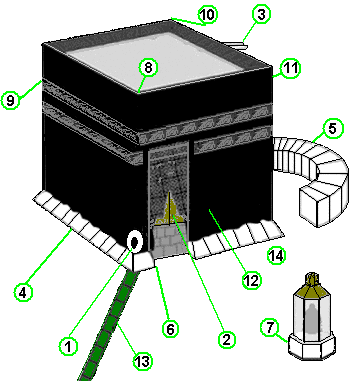 The wall directly adjacent to the entrance of the Kaaba has six tablets inlaid with inscriptions, and there are several more tablets along the other walls. Along the top corners of the walls runs a green cloth embroidered with gold Qur'anic verses. Caretakers anoint the marble cladding with the same scented oil used to anoint the Black Stone outside. Three pillars (some erroneously report two) stand inside the Kaaba, with a small altar or table set between one and the other two. (It has been claimed that this table is used for the placement of perfumes or other items.) Lamp-like objects (possible lanterns or crucible censers) hang from the ceiling. The ceiling itself is of a darker colour, similar in hue to the lower trimming. A golden door—the bāb al-tawbah (also romanized as Baabut Taubah, and meaning "Door of Repentance")—on the right wall (right of the entrance) opens to an enclosed staircase that leads to a hatch, which itself opens to the roof. Both the roof and ceiling (collectively dual-layered) are made of stainless steel-capped teak wood.

Each numbered item in the following list corresponds to features noted in the diagram image.

1.Al-Ḥajaru al-Aswad, "the Black Stone", is located on the Kaaba's eastern corner. Its northern corner is known as the Ruknu l-ˤĪrāqī, "the Iraqi corner", its western as the Ruknu sh-Shāmī, "the Levantine corner", and its southern as Ruknu l-Yamanī, "the Yemeni corner" taught by Imam Ali. The four corners of the Kaaba roughly point toward the four cardinal directions of the compass. Its major (long) axis is aligned with the rising of the star Canopus toward which its southern wall is directed, while its minor axis (its east-west facades) roughly align with the sunrise of summer solstice and the sunset of winter solstice.

2.The entrance is a door set 2.13 m (7 ft) above the ground on the north-eastern wall of the Kaaba, which acts as the façade. In 1979 the 300 kg gold doors made by chief artist Ahmad bin Ibrahim Badr, replaced the old silver doors made by his father, Ibrahim Badr in 1942.[12] There is a wooden staircase on wheels, usually stored in the mosque between the arch-shaped gate of Banū Shaybah and the Zamzam Well.

3. Mīzāb al-Raḥmah, rainwater spout made of gold. Added in the rebuilding of 1627 after the previous year's rain caused three of the four walls to collapse.

4.Gutter, added in 1627 to protect the foundation from groundwater.

5. Hatīm (also romanized as hateem), a low wall originally part of the Kaaba. It is a semi-circular wall opposite, but not connected to, the north-west wall of the Kaaba. This is 90 cm (35 in) in height and 1.5 m (4.9 ft) in width, and is composed of white marble. At one time the space lying between the hatīm and the Kaaba belonged to the Kaaba itself, and for this reason it is not entered during the tawaf.

6. Al-Multazam, the roughly 2 meter space along the wall between the Black Stone and the entry door. It is sometimes considered pious or desirable for a hajji to touch this area of the Kaaba, or perform dua here.

7. The Station of Ibrahim (Maqam Ibrahim), a glass and metal enclosure with what is said to be an imprint of Abraham's feet. Ibrahim is said to have stood on this stone during the construction of the upper parts of the Kaaba, raising Ismail on his shoulders for the uppermost parts.[13]

11. Corner of Iraq (North-East). This inside corner, behind a curtain, contains the Babut Taubah, Door of Repentance, which leads to a staircase to the roof.

12. Kiswah, the embroidered covering. Kiswa is a black silk and gold curtain which is replaced annually during the Hajj pilgrimage. Two-thirds of the way up is a band of gold-embroidered Quranic text, including the Shahada, the Islamic declaration of faith.

13. Marble stripe marking the beginning and end of each circumambulation.

Ibn Kathir, the famous commentator on the Quran, mentions two interpretations among the Muslims on the origin of the Kaaba. One is that the shrine was a place of worship for Angels before the creation of man. Later, a temple was built on the location by Adam and Eve which was lost during the flood in Noah's time and was finally rebuilt by Abraham and Ishmael as mentioned later in the Quran. Ibn Kathir regarded this tradition as weak and preferred instead the narration by Ali ibn Abi Talib that although several other temples might have preceded the Kaabah, it was the first "House of God", dedicated solely to Him, built by His instruction and sanctified and blessed by Him as stated in Quran 22:26–29. A Hadith in Sahih al-Bukhari states that the Kaaba was the First Mosque on Earth, and the Second Mosque was the Temple in Jerusalem.

While Abraham was building the Kaaba, an angel brought to him the Black Stone which he placed in the eastern corner of the structure. Another stone was the Maqam-e-Ibrahim (literally the Station of Abraham) where Abraham stood for elevation while building the structure. The Black Stone and the Maqam-e-Ibrahim are believed by Muslims to be the only remnant of the original structure made by Abraham as naturally the remaining structure had to be demolished and rebuilt several times over history for maintenance purposes. After the construction was complete, God enjoined the descendants of Ishmael to perform an annual pilgrimage: the Hajj and the Korban, sacrifice of cattle. The vicinity of the shrine was also made a sanctuary where bloodshed and war were forbidden.[Quran 22:26–33]

During Muhammad's time (570–632 CE), the Kaaba was considered a holy and sacred site by the local Arabs and later Islam recognized it. Muhammad took part in the reconstruction of the Kaaba after its structure was damaged due to floods around 600 CE. Ibn Ishaq's Sirat Rasūl Allāh, one of the biographies of Muhammad (as reconstructed and translated by Guillaume), describes Muhammad settling a quarrel between Meccan clans as to which clan should set the Black Stone cornerstone in place.
According to Ishaq's biography, Muhammad's solution was to have all the clan elders raise the cornerstone on a cloak, after which Muhammad set the stone into its final place with his own hands. Ibn Ishaq says that the timber for the reconstruction of the Kaaba came from a Greek ship that had been wrecked on the Red Sea coast at Shu'ayba and that the work was undertaken by a Coptic carpenter called Baqum. Muhammad's night journey is said to have taken him from the Kaaba to the Temple Mount and heavenwards from there.

Muslims initially considered Jerusalem as their qibla and faced that direction while offering prayers; however, pilgrimage to the Kaaba was considered a religious duty though its rites were not yet finalized. During the first half of Muhammad's time as a prophet while he was at Mecca, he and his followers were severely persecuted which eventually led to their migration to Medina in 622 CE. In 624 CE the direction of the Qiblah (Prayer Direction) was changed from Jerusalem to the Kaabah in Mecca. In 628CE Muhammad led a group of Muslims towards Mecca with the intention of performing the minor pilgrimage (Umrah) at the Kaaba, though he wasn't allowed by the people of Mecca to do so, he secured a peace treaty with them called the Treaty of Hudaybiyyah, which allowed the Muslims to freely perform pilgrimage at the Kaaba from the following year.

At the culmination of his mission, in 629 CE, Muhammad conquered Mecca with a Muslim army. His first action was to remove statues and images from the Kaaba. According to reports collected by Ibn Ishaq and al-Azraqi, Muhammad spared a painting of Mary and Jesus, and a fresco of Abraham; but according to Ibn Hisham all pictures were erased.

Narrated Abdullah: When the Prophet entered Mecca on the day of the Conquest, there were 360 idols around the Ka'bah. The Prophet started striking them with a stick he had in his hand and was saying, "Truth has come and Falsehood has Vanished.. (Qur'an 17:81)"
— Sahih Al-Bukhari, Book 59, Hadith 583

After the conquest Muhammad restated the sanctity and holiness of Mecca, including its Great Mosque, in Islam. He performed a lesser Pilgrimage (Umrah) in 629 CE, followed by the Greater Pilgrimage(Hajj) in 632 CE called the Farewell Pilgrimage since Muhammad prophesied his impending death on this event.
Click to expand...
F 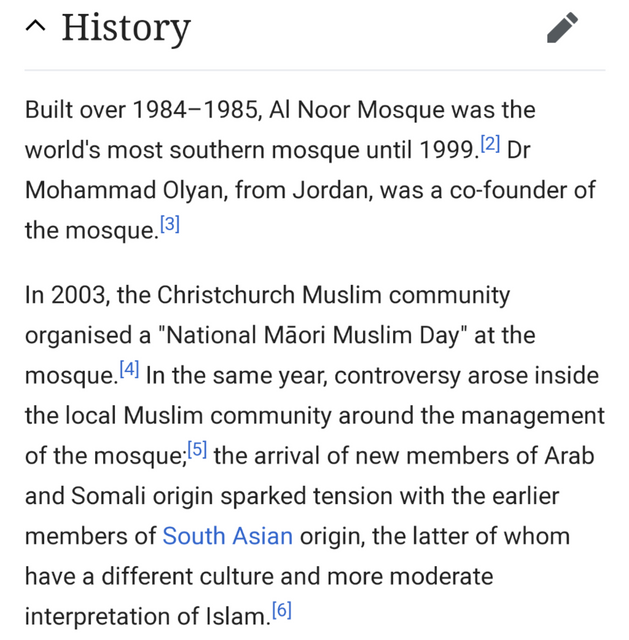 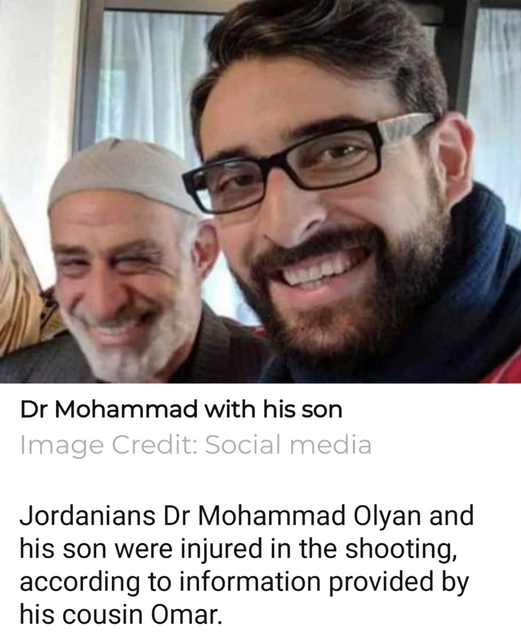 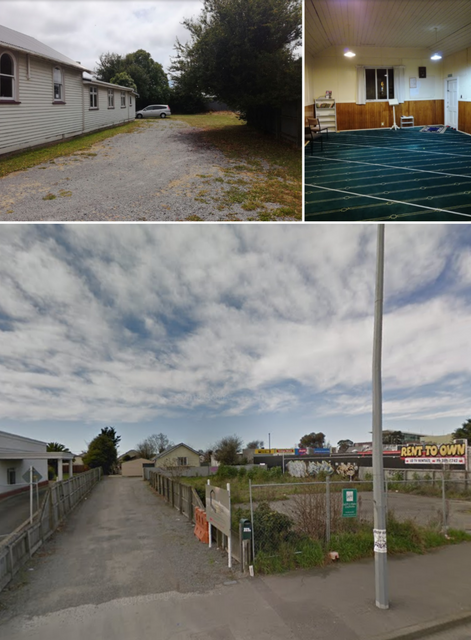 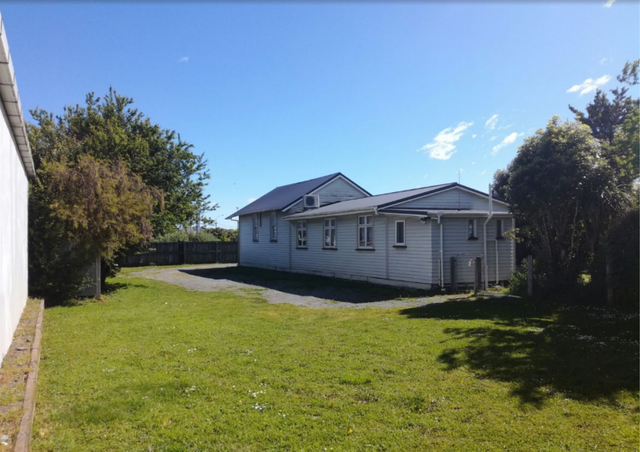 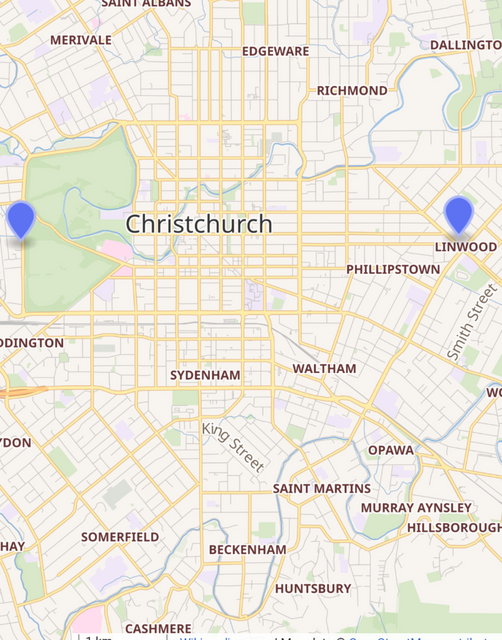 Click to expand...
They wanted to say hi (again) 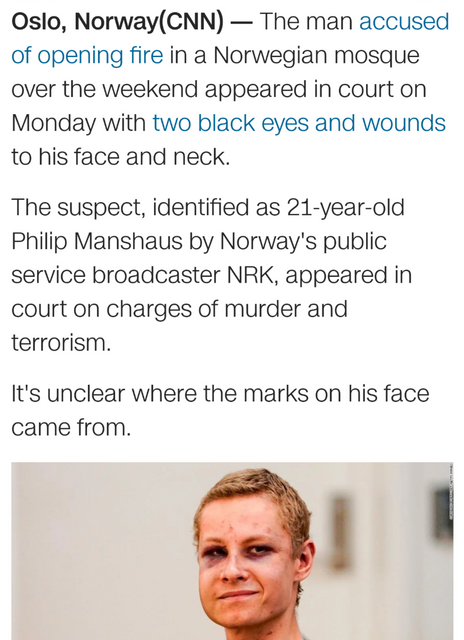 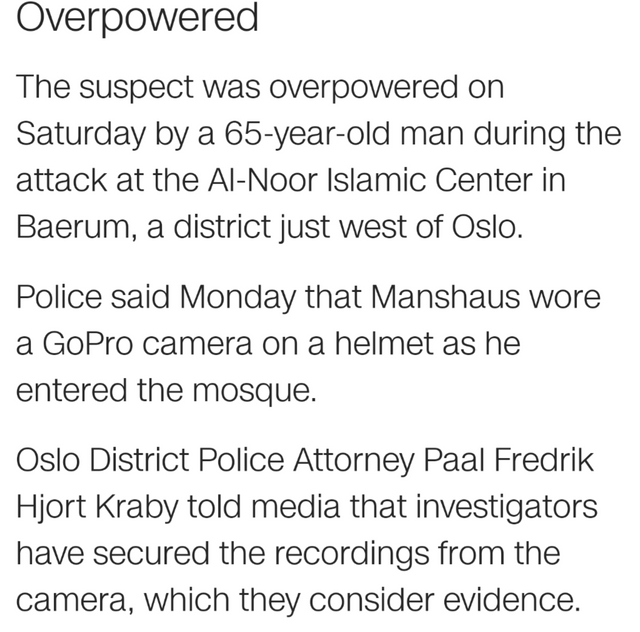 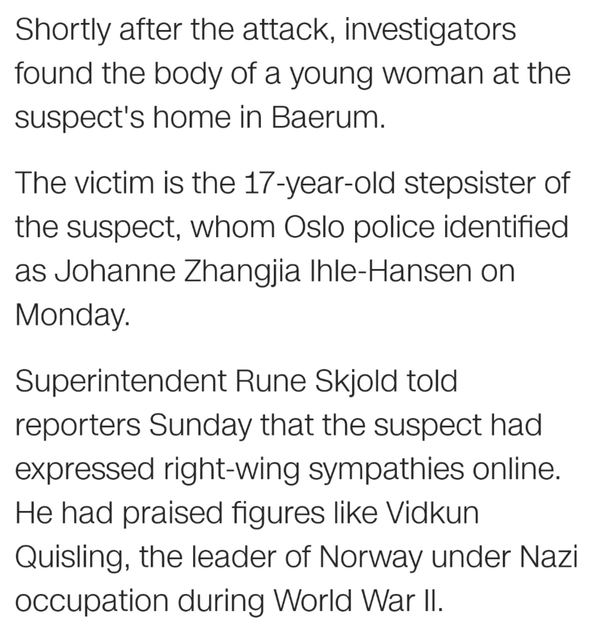 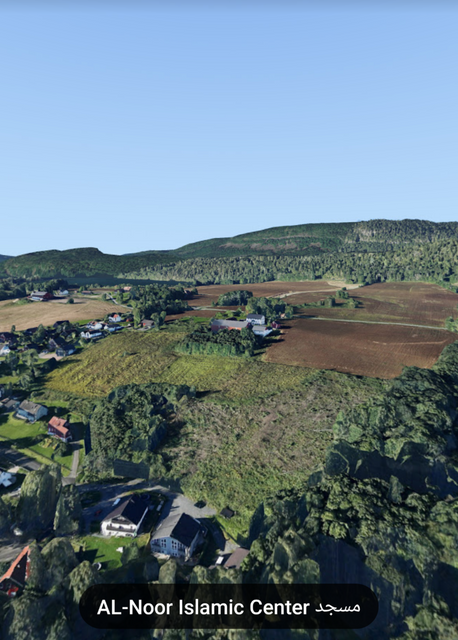 StillHustlin said:
Jesus Campos is a liar. Allegedly radio'd shooting but never mentioned he was shot...

Not registered/licensed as security in the state of Nevada either (search the database), because he's not legit... Even if his real name is Jesus Quintero, still not in the database...
Click to expand...
Who wants to see the security tape in the hallway where Jesus Campos gets shot by Stephen Paddock (allegedly)?


Stand on Your Square
Click to expand...
For every action there's an equal and opposite reaction

MGM SELLING OFF SOME RESORTS
https://skift.com/2019/09/20/mgm-likely-to-sell-circus-circus-and-other-las-vegas-resorts/amp/ 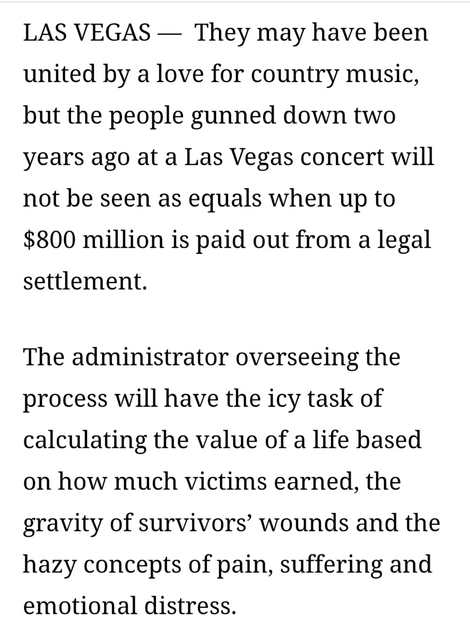 Was it WORTH it 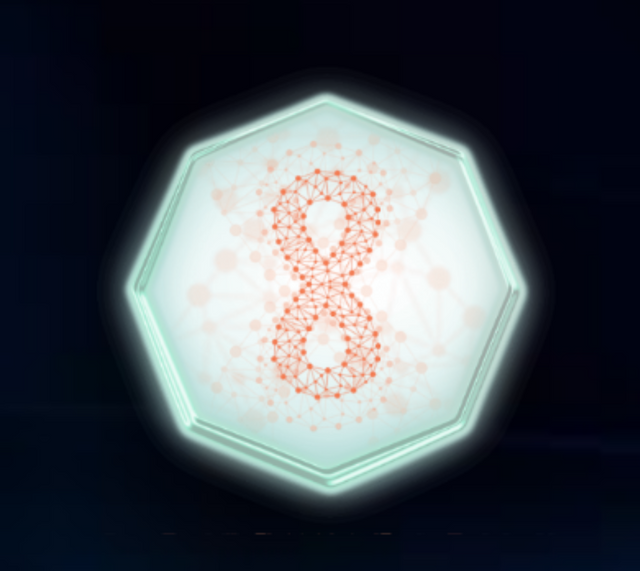 The Power of 8 (uploaded just a couple days before massacre):

Lynne McTaggart (born 23 January 1951, in New York City) is an American lecturer, journalist, author, and publisher. She is the author of six books, including The Intention Experiment and The Field. According to her author profile, she is a spokesperson "on consciousness, the new physics, and the practices of conventional and alternative medicine."[1] 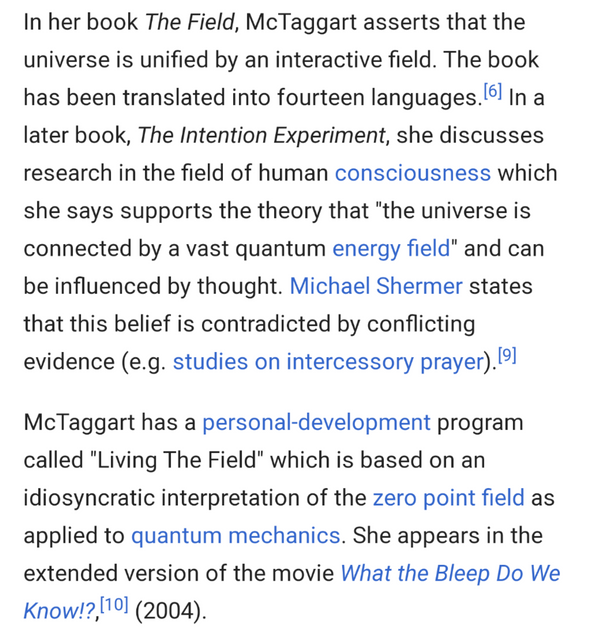 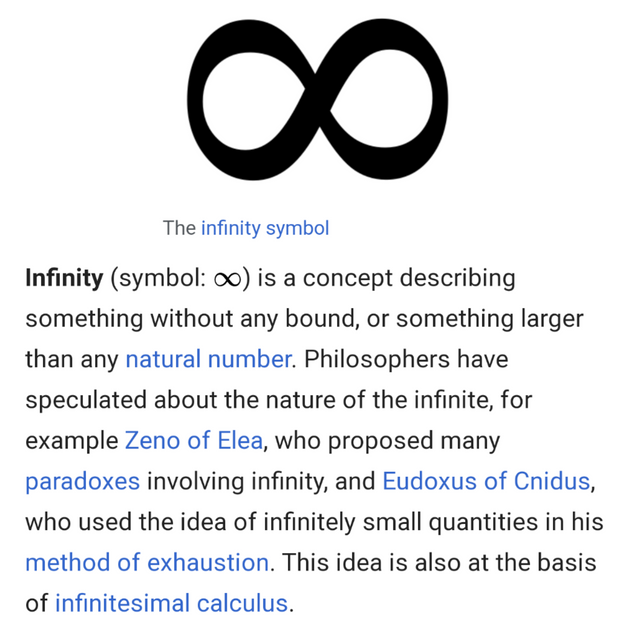 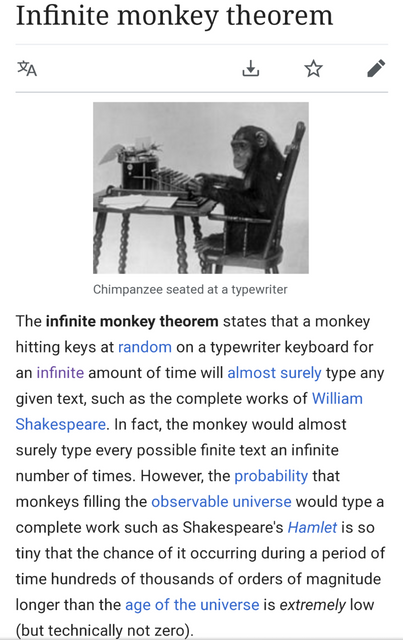 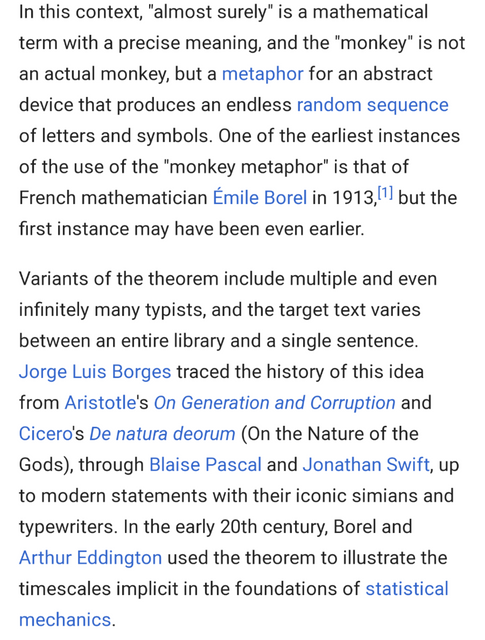 StillHustlin said:
Was it WORTH it
Click to expand...
Power of the 8 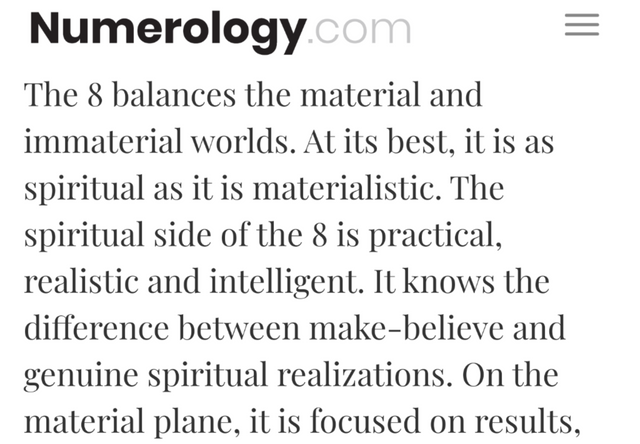 SAYS THE MONKEY WHO LEARNED BY WATCHING THEIR MONKEY PARENTS 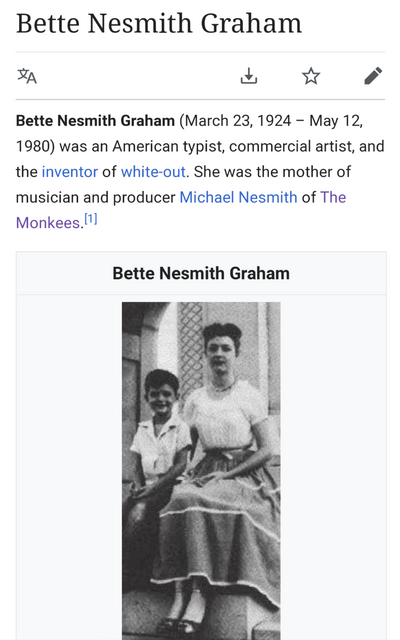 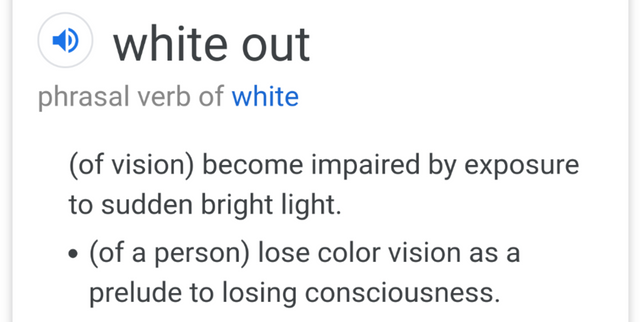 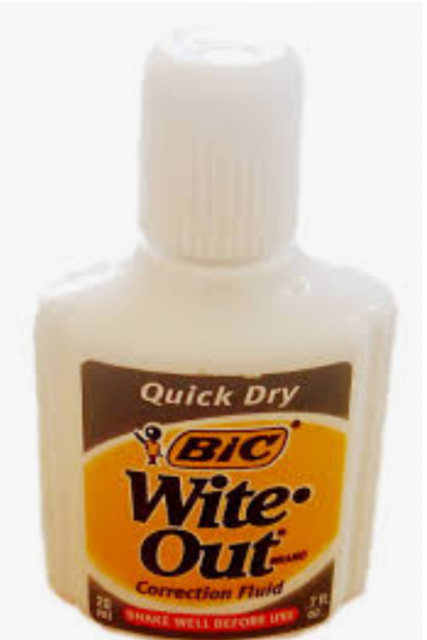