InfamousICON said:
I don't know where you found separation stats, but are you sure they're updated through today's game?

His good game 2 padded the fuck out of his first two weeks stats and he came back from that game and dropped a dud today.

There hasn't been a single time in week 1 or 3 where I've seen the play and been like "Amari was open, why didn't Carr throw to him?". The general consensus on most Raider forums is "where the hell is Amari? He's basically a ghost".

He was like 56thth in the league in yards after catch after his good game 2, gonna drop further after today when stats update. Which sucks, because his entire selling point was catch and run.

He's gonna drop out of the top 50 in total yards after today.

He's our number 1 receiver. Dude shouldn't by out of the top 50 in every major receiving category.

We drafted him #4. He still isn't elite in his 4th year in the league. I hope he comes back and shows otherwise, but him still having butter fingers this far into his career is making me a doubter.
Click to expand...
I think he was top 10 in separation before today’s game, at least after game 1 he was. He was so fucking open in game 1, Carr just didn’t have time or the balls to hit him. Look at this article...https://www.raidersbeat.com/coaches...ere-derek-carr-missed-amari-cooper-downfield/

Either way, I’m defending coop but I see your point, he no way has earned a big contract or
Lived up to his draft spot. But I think he still has a chance to have a solid season. Derek just seems to get stuck on one guy, cook,coop, now Jordy this game.

This loss falls on the coaching staff and Carr for throwing that horrible pass on first down in the redzone, but the team has been competing for what it’s worth

Hope we can catch a win at home over the Browns.

Calling it now, we are Fav to win Sunday but we'll figure out how to lose it, ill be at the fucking game just because I'm to loyal and this might be our last year In Oakland.... Cooper needs to figure it out, Carr needs to stop being chicken shit in the pocket and getting rid of the ball in stupid ass places, I miss the Carr who would run for first downs and shit

Holy fuck we did it lol

That game was a crazy ass roller coaster.

Ugly game, but got the win. Playing against a rookie QB at home, it shouldn’t have been that close.

Haha ate my words kinda, anybody who saw that game know we got lucky as FUCK

Our new punter blows. I'd rather have Marquette over kicking coverage and making the coverage have to work than having this dude's weak leg.

Welp, 1/3 of the season is done and we're on pace for 3 wins this year, which pretty much means full on rebuild mode next year, which will take a few seasons. The last rebuild netted us 1 playoff game. I'm 35 years old now, hopefully we see another playoff game before I'm 40 lol
Props: Unk1ne

Sorry Excuse for a team, Browns got a better record then us HAHA!
Props: T-Rip, BIG CHUNK and InfamousICON

Unk1ne said:
Sorry Excuse for a team, Browns got a better record then us HAHA!
Click to expand...
Honestly I think the Browns probably should've gotten the W against us too, but we got the better of bad ref calls throughout the game. We should really be 0-5 right now lol
Props: Unk1ne

that's the truth man, browns could be 5-0 as well if the FG kicker didn't ruin those first two games
Props: InfamousICON

Olson sucks ass, I blame Carr for being fucking retarded but I can't blame it all on him, if he could have a OC for more then fucking 1 or 2 years I think he may be better, look at 06 dude was beasting... I dunno I still think JDR really got fucked over on the firing

Gruden should be canned by the end of the season if he doesn’t start winning some games
Props: MaC A$$ ViC and Unk1ne

that's the fucking truth man, I still don't understand shit, why fix something that wasn't really broken with Del Rio? maybe the D needed fixing but that was it why let Musgrave leave? I see a lot of shit getting addressed real soon, we are the Browns of the NFL, at least they have an ownership trying to fix the teaming have just drafted bad Qb's we seem to draft bad everything and when we draft someone like Mack we just let them go because we are to cheap to fucking pay the player

O-line is trash. Carr has no time at all. Gruden's 1st rounder Kolton Miller is fucking terrible, gets beat non stop. LT is something either you're good at or you're not, that's not a "he's a rookie so he gets a pass" type position.

Only positives I see from our young players is Mo Hurst and Arden Key, both are playing well and both are ranked among the best rookies at their positions for QB pressures. Gareon Conley can be great if he learns to read the receiver's routes a little better. Conley either sticks to his guy like glue or gets beat big lol 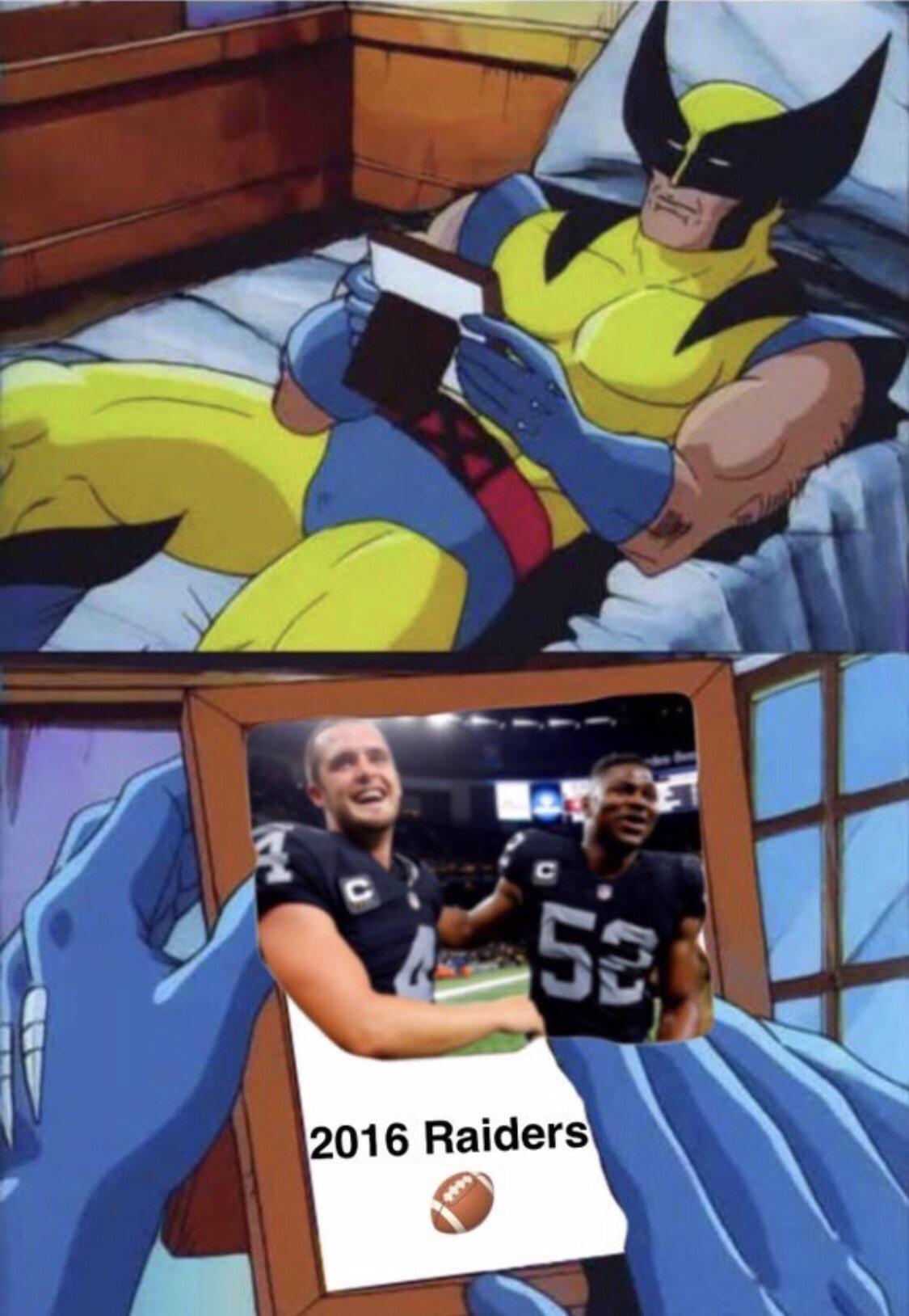 I miss 2016! how the fuck did we look so good in 16 and now at this? I understand we've lost people but fuck man our Oline is trash god damnit

Only happy for yaws demise since @Meta4cal doesnt pay on his bets... may yaw be shit until he makes good on it. 😎

Cooper I can understand, because I know there's some teams out there that will give up something big for him.

But Karl Joseph and Gareon Conley is stupid as fuck to get rid of, so much upside to both of them. I read the reason Karl Joseph hasn't been playing this year is solely because Gruden thinks he's too short.