Is the well known slogan of Donald Trump but what does he actually mean by that?
I've been thinking about this but I have no idea what he means.
Does he mean any specific era in time or what?

Does he maybe mean the time America was a "super power" ? Dare I say the United States actually never was a super power and the way things are going it will not be one in the foreseeable future.

Yea I guess I just dared to say that.

But seriously tho. Does anyone know what trump actually mean by "let's make America great again".
Props: OuijaBoard, OuijaBoard, Mixerr and 3 others

iaoish said:
Is the well known slogan of Donald Trump but what does he actually mean by that?
I've been thinking about this but I have no idea what he means.
Does he mean any specific era in time or what?

Does he maybe mean the time America was a "super power" ? Dare I say the United States actually never was a super power and the way things are going it will not be one in the foreseeable future.

Yea I guess I just dared to say that.

But seriously tho. Does anyone know what trump actually mean by "let's make America great again".
Click to expand...
It can mean lots of things. Generally, it is a message to conservatives to "undo the damage" that Obama and the Liberals have caused this country over the past 8 years. A President has traditionally always worked to maintain the American hegemony, that is we're supposed to be made to feel we're #1 in the World in everything and are a Superpower like you suggested. Conservatives feel that under Obama we have looked weak and we have begun to decline in several areas especially on the world stage, where "he's embarassed us" and "apologized too much".

They feel we've been a country all about the individual, no handouts, a "pull yourself up by your own bootstraps" type attitude and now with Healthcare we're on a slippery slope to socialism, and Donald has always maintained he did just that (albeit with his small loan of one million dollars). There are several others layers of meaning that you can add onto it and it's pretty open to interpretation but that's the general gist of it.
Props: Mixerr and Mixerr

Trump has been speaking the same trumpisms for 4 decades.
Props: Mixerr and Mixerr

Yes, I know. Trump wants America to return to the time when it stood on its own. No more NATO, remove the UN from within our borders, stop caving in to other countries economically, etc. Unfortunately, he will be unable to do those things in 8 years, much less 4. Also unfortunately, he will do nearly nil for those living in poverty, those who are seriously mentally ill, and the middle class will likely suffer for the first couple years of his term economically as he would have to reverse the economic poison caused during the Bush, Clinton, Bush Jr,, and Obama administrations (I purposefully left Reagan out because Bush Sr. was the real president during that admin).
Props: Mixerr and Mixerr

tbh America has to remove world opinion from its internal dialogue, just as other countries do. Sovereignty is crucial and key.
Props: Mixerr and Mixerr

STEWART: But the idea being that Muslims, hey man, all he's saying is they're evil and shouldn't be allowed in this country. He's just telling it like it is, but God forbid you say, "Happy Holidays" in December. It's fucking war. So who is it who's exactly sensitive here? We're only talking about what are the trigger points and the trigger points, to me, seem to be, on one side, grounded in a certain reality of life that only those with no experience or empathy towards what those individuals are going through are having and the other seems to be a clinging to a societal paradigm that just doesn't exist anymore and probably never did. When was America great? What is this time that he speaks of, '81 to '82? Like what are we talking about, and who took your country away from you?
AXELROD: Yeah.
STEWART: Whose country, you know, whose is it?
AXELROD: Yeah.
STEWART: Take up...
AXELROD: Well those...
STEWARET: ...take up the argument with the founders, take it up with the age of reason. That's the, you know, "All men are created equal," that's fucked the whole thing up.

iaoish said:
Is the well known slogan of Donald Trump but what does he actually mean by that?
I've been thinking about this but I have no idea what he means.
But seriously tho. Does anyone know what trump actually mean by "let's make America great again".
Click to expand... 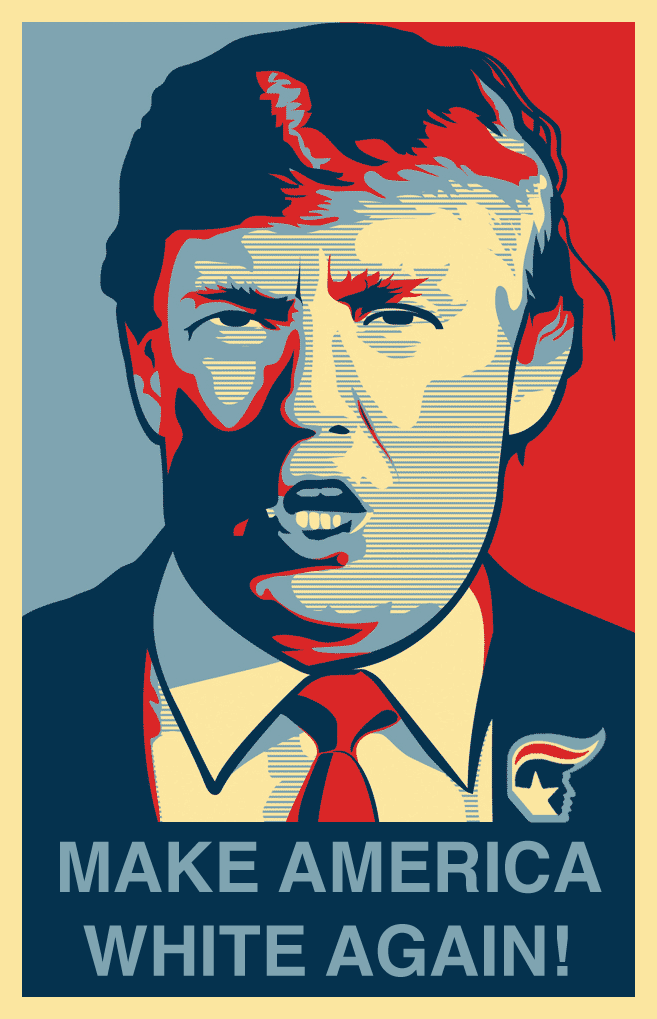 This whole election is a fucking joke. I know this may be my tin foil hat doing the talking but its almost like Trump was plugged in to make sure Hilary wins the election. Trump is going to lose alot of moderate republican voters to Hilary. His nomination has the whole republican party in total disarray because he is such a wildcard.

I do not care for either of these candidates, Hilary is a calculating, underhanded woman who will do anything to become president and Trump is a misogynistic, racist egomaniac who has no idea what hes talking himself into.

My bet is on Hilary winning the election, hell at least my guy Bill will be back in office .

I might have to move to Japan with wifey till this shit blows over lol.
Props: Mixerr and Mixerr

He means make it great like when people paid only 50 cents a burger.
Back when fucking fast food workers used to wash their hands and not fuck with your food when they served it to you..

back when the fries really tasted like freedom. And back when you didn't have spies looking at everything you do. When ever American had the right to be rich, and eat steak all day.
That is when American was great!
Props: RAVAGE and RAVAGE

I kinda forgot about this thread then I ran in to this video and wondered why does Clinton get a standing ovation in 1995 for saying the exact same shit Trump is saying today who is labeled a racist?

because the US public are generally stupid
Props: NotAllThere and NotAllThere

NEW SPAIN
New Spain - Wikipedia, the free encyclopedia
New Spain (Spanish: Nueva España) was a Spanish colony in the New World north of the Isthmus of Panama. It was established following the Spanish conquest of the Aztec Empire in 1521, and following additional conquests, it was made a viceroyalty (Spanish: virreinato) in 1535. The first of four viceroyalties Spain created in the Americas, it comprised Mexico, Central America, much of the Southwestern and Central United States, the Spanish West Indies, Spanish Florida, and eventually, the Philippines and other Pacific islands.

After 1535 the colony was governed by the Viceroy of New Spain, an appointed minister of the King of Spain, who ruled as monarch over the colony. The capital of New Spain was Mexico City.[1][2]

New Spain lost parts of its territory to other European powers and independence, but the core area remained under Spanish control until 1821, when it achieved independence as the Mexican Empire— when the latter dissolved, it became modern Mexico and Central America. It developed highly regional divisions, which reflect the impact of climate, topography, the presence or absence of dense indigenous populations, and the presence or absence of mineral resources. The areas of central and southern Mexico had dense indigenous populations with complex social, political, and economic organization. The northern area of Mexico, a region of nomadic and semi-nomadic indigenous populations, was not generally conducive to dense settlements, but the discovery of silver in Zacatecas in the 1540s drew settlement there to exploit the mines. Silver mining not only became the engine of the economy of New Spain, but vastly enriched Spain, and transformed the global economy. New Spain was the New World terminus of the Philippine trade, making the viceroyalty a vital link between Spain's New World empire and its Asian empire.

SAME PIG NO MATTER HOW YOU DRESS IT.....

SPAIN IS the hidden hand

The problem is to a good number of Trumps constituents, making America great again means the "deblackification" of the white house and the inflammatory shit Trump said against minorities that got himself elected. I do not personally believe Trump is a racist but it is a irrefutable fact that nearly every person with ethnocentric views supporting the white race voted for Trump, that's why so many people are upset right now. People are also angry that the majority of people who voted for Trump are not racist but took his culturally insensitive rhetoric with a grain of salt like it wasn't a big deal. This is a statement to non whites saying "I don't hate you but I do not particularly care about your status in America". Trump winning the election has created a communicative landscape in this country that if you are not white your life matters less in many circles, there is little room to debate this statement. If you are not white and you voted for Trump, to many you will be considered "one of the good ones" let that shit soak in for a minute.

Since election day there has been an influx of white supremacist groups coming out of the rocks they have been hiding under to show the world the ugliness they believe in. Just yesterday I was out walking my dog and saw about 20 bikers sporting swastikas and other symbols of hate cruising down the closest major street from my house like it was all good. Trump winning the election has provoked an rise in the belief that white supremacy is acceptable in today's society anyone who denounces this statement is lying to themselves. I'm not saying America may turn into a white nationalist country but their interests are obviously being heard through a Trump presidency.
Last edited: Nov 13, 2016

GHP said:
Just yesterday I was out walking my dog and saw about 20 bikers sporting swastikas and other symbols of hate cruising down the closest major street from my house like it was all good.
Click to expand...
Which club are you referring to and what would you do about it?

StillHustlin said:
Which club are you referring to and what would you do about it?
Click to expand...
Not sure what your asking but I'm guessing your asking what motorcycle club I saw?? I do not know.. Only one of them I saw was for sure rocking a swastika on his vest. The other guys were wearing stuff that looked like typical biker gear, alot of american flags. The whole encounter was like 5-10 seconds. I'm afraid patriotism and racism will begin to meld into the same creature, that's how Hitler manipulated the Germans into playing along with his master plan. A little bit of poison can go a long way.
You must log in or register to reply here.
Share: Facebook Twitter Google+ Reddit Pinterest Tumblr WhatsApp Email Link
Top Bottom