Seen on Bang Ig they got raided and took him in
Props: Ezoterick and east925bay 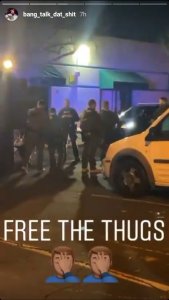 Fuckin with all them young clowns
Props: DJ Coma, Hood Rat Matt, Chree and 2 others
E

Bail set over a million dollars

T-Rip said:
someone get killed?
Click to expand...
Can’t call it. That’s what it said bail was
Props: Hood Rat Matt and T-Rip

wasn't Wax showing a letter saying he could buy a firearm and CC permit in Washington State recently?
Props: DuceTheTruth and Chree
S

As much as I love Wax's music (not so much newer stuff) - dude is 41yrs old and is still fucking around in the streets.

At what point do you fall back?

Just seems like this was inevitable. Dude just wanted to stay in the streets doing street shit. Not really sure why? Now he has to deal with those consequences.

Hope he is able to maneuver out of it.
Props: DJ Coma
K

Someone posting on a-wax ig and Megan posted pics with him. But I didn’t hear anything about bail yet
H

Yup I just googled his name and there’s articles abt it not disclosing what he got booked for yet. Free the hardest rapper in the game I’ll def be throwin some $ on the kids books F.Suckaz
N

PITTSBURG — The popular Bay Area rapper A-Wax was arrested here Tuesday, for reasons that police say they cannot disclose.
A-Wax, whose real name is Aaron Doppie, was arrested and booked into Martinez Detention Facility at a little before 6 a.m. Tuesday, county records show. According to social media postings, Doppie was arrested in Pittsburg, along with two other men whose names have not been released.
However, charges have not been filed against him, and it is expected that he will be released soon, police said.


County records indicated that as of 9 p.m. Wednesday, Doppie was still in MDF in lieu of $1.1 million bail. However, his Instagram account, @WaxFase, posted new sneak preview for a new music video Wednesday evening, so it is unclear if those records are accurate.
A Pittsburg police spokesman refused to say what charge(s) Doppie was arrested on suspicion of, citing an ongoing investigation.
“He was arrested on an outstanding Ramey warrant related to an ongoing case. Charges have not been filed and as far as I know he has or will be released,” Pittsburg Cpt. Patrick Wentz said in an email. “Being that the case is ongoing, there are not any details we can share at this point.”
Under state law, police can keep someone in custody for up to 72 hours in business days without any charges having been filed. That would put Doppie’s release for sometime Friday morning, assuming charges are not filed before then.
During Doppie’s 20-year rap career, he’s released songs with download numbers in the multi-millions.
Props: east925bay and Ezoterick

Getting snitched on (regardless if true or false) is the worst
Humans are worst animals on planet
Props: dalycity650

Heard from one of his folks they said they tryna pinch a murder on bruh.
Props: DJ Coma, NS Niner Ryda and east925bay

I heard Joe blow snitched and this was the only way to get his chain back.


Source: 2 bitches from the bay
Props: DJ Coma, bigshotpimp, phncke and 6 others