El Chapo extradited from Mexico to US

Notorious Mexican drug lord Joaquin "El Chapo" Guzman has been extradited to the US, the Mexican governments announced on Thursday.
He arrived in New York on a flight from Cuidad Juarez.
Mr Guzman, who could face life in a US prison, is wanted on charges of drug trafficking and smuggling vast amounts of drugs into the country.
The leader of the Sinaloa cartel was facing two extradition requests - one from California and another from Texas.
Last year he was moved to a prison in Ciudad Juarez, which lies just across the border from El Paso in Texas, but authorities at the time denied the transfer was a precursor to extradition.

Mr Guzman has been fighting to stay in Mexico but his appeals were rejected.
He was under close watch, having previously broken out of two Mexican high-security jails.

He is now expected to appear in a US federal court in Brooklyn on Friday.

The extradition to the United States of "El Chapo"Guzman brings to an end one of the most notorious drug lord sagas of modern times. Believed to have amassed a billion dollar fortune through the illegal drug trade, Guzman was always likely to make headlines.

But it was his ability to evade capture which made Guzman stand out from other drug gang leaders. His first high profile escape was in 2001 when it was reported - despite some doubts - that he had escaped from a maximum security prison by hiding in a laundry basket.

Mexican soldiers on guard at Ciudad Juarez airport, where Guzman took off
He was recaptured in 2014 but it didn't last. And this time there was no doubt about how he fled. His brazen escape through a tunnel which his men had built right underneath his cell - and right under the noses of the authorities - was captured on CCTV, much to the humiliation of the government.

He was picked up again last year and since then has fought against extradition to the US on legal grounds, claiming he could face the death penalty in Texas. However, now, on the final day of the Obama Administration's time in office, the Mexican authorities denied his request and handed him to the Americans, saying they had received the necessary assurances that the extradition process did not infringe Guzman's human rights.

It is now very unlikely that "El Chapo", surely the most notorious drug lord since Pablo Escobar, will ever again be a free man.
A federal indictment in the Eastern District of New York, where Guzman is expected to be prosecuted, accuses him of overseeing a trafficking cartel with thousands of members and billions of dollars in profits laundered back to Mexico, the Associated Press news agency reports.

It says Guzman and other members of the Sinaloa cartel employed hit men who carried out murders, kidnappings and acts of torture.
Mexican President Enrique Pena Nieto had initially resisted extraditing the cartel leader to the US, insisting that he should face justice at home.
But after Guzman was recaptured in January 2016, Pena Nieto changed his mind on extradition and ordered officials to speed up the process. 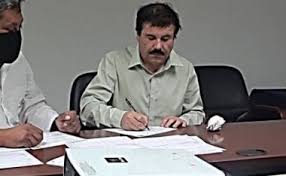 I drink a lot of beer

The man deserves to be free. Anyone against circumstantial evidence and false accusations should agree.
Props: westside27, westside27, MaC A$$ ViC and 1 other person