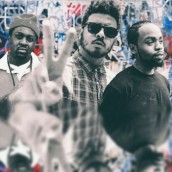 Side A, as referenced on the Blue Note-flipped donuts as COLE SIDE effortlessly demonstrates why the The Rugged Nuggets are the newest collective to carry the torch of instrumental music. Emerging from the tight-knit Los Angeles Funk/Soul community, the 7-piece live band deliver a sound on “Head Above Water” that’s as inspired, realized and refreshing as the city landscape and culture that the musicians reside within.

Side B, as noted on the “buoy-themed” donut as COAL SIDE, represents a coast-to-coast Hip-Hop flight as DZA kicks things off by putting on for his hometown of Harlem in a major way. His verse is pure braggadocio-tinged flames and brimming with bars, among them his NY Jets-referencing closing line of “I’m Broadway Joe with my mink on drag.”

After Rev shreds the first hook chock full of quotables from Mos Def, Nas, M.O.P., 50 Cent, AZ and more, Mutant Academy’s Fly Anakin picks up right where DZA left off and delivers a relentless stream of rhymes. The VA native continues the stylish boasts when he spits, “They got a warrant for my style,” amidst a flurry of raps that demand repeated listens.

That same sentiment applies to Blu’s verse, which ends “Head Above Water” with thoughtful lyrics. The Los Angeles stalwart waxes poetic about trying to make enough bread to raise his daughter and “teach her how to bodyslam Sgt. Slaughter”—the perfect blend of wisdom and bravado that’s made Blu a legend.

This sure to be collector’s item, which boasts artwork designed by Joe Buck, is now available exclusively for Record Store Day, and can be purchased through all participating Record Store Day vendors. An even more exclusive version pressed on transparent blue haze can be purchased online via Fat Beats, while supplies last. Both the music and partnership embody the spirit of RSD, which emanates feelings of community and soul over the bullshit…cause we’re all just tryin’ to rise up and keep our heads above water.