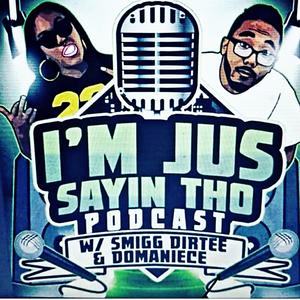 The good people at ImJusSayinTho™return with this week’s episode of exactly what the people have been asking for. San Diego talk-radio personality Domaniece Blake, and Sacramento / San Diego rapper Smigg Dirtee are back in full effect. They debate and discuss varied topics ranging from addiction, to battle rap, to the rap industry in general, to exoctic foods, amongst other things. As always the debate gets heated at times, but they always manage to get back on track which makes for a  very entertaining listen. They give listeners a run down of what someone could expect to find if they took a quick inventory of the two’s personal playlists. The discussion leads to some of Brotha Lynch Hung’s classic albums as well as his career in general. San Diego rapper Rob Stone  and his Stonecold Tour gets a nod from the duo as well. Salute to Rob Stone for taking other San Diego rappers on tour with him. Early So So Def artists Xscape and Bow Wow are also in the mix this episode. In line with battle rap, it seems that the upcoming event Smack Vol.2 with Main Event Hollow Da Don vs Arsonal, they discuss Hollow’s preparation & Bigg K vs. T-Top might be one of the most anticipated. Not to mention, Bigg K is back on Smack/ URL for the first time in years! They also argue over Female Battle Rap, Jaz The Rapper’s battle record & B Dot vs Emerson Kennedy. Things get a little controversial when the two talk about interracial relationships, but it’s no surprise since “Talkin’ They Shit” is what they always do. The Hip Hop Trivia segment closes out the episode on a humorous note to hopefully give y’all one last laugh until next time on Im Jus Sayin Tho™….. Sssssssgetit and don’t forget to Comment, Subscribe, Rate & Review!