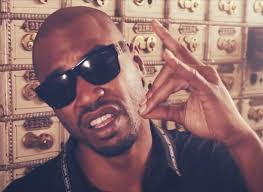 The New Jersey vet was arrested on a gun charge, a few years after his release from a California jail for human trafficking and pimping.

According to Lt. Art Jensen, the 41-year-old Bergen County rapper, whose real name is Saleem Bligen, was detained after trying to run from police officer on Thursday, December 1st, around 4 p.m. near his old stomping grounds on Bergen Avenue and Mount Vernon Street, the Daily Voice reports.

Officers Kenneth Knebl, Joe Avila, Christopher Dooley, and Lavrone Green, cops from the Ridgefield Park Police Department, were tipped off that he might have violated a restraining order.

Law enforcement found him in a local restaurant, not far from his old apartment building in the business district, but once he saw the cops he dipped into the bathroom.

When he came out, according to Jenson, he went over to Knebl to talk.

The officer, after speaking to the battle rap star, went into the bathroom, searched it, and found a fully loaded, 9mm Sig Sauer P320 handgun on the windowsill.

The cops also found a small number of prescription drugs, a large-capacity magazine, and hollow-nosed bullets.