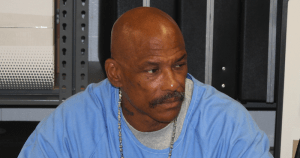 Reports are coming in that Sanyika Shakur AKA Monster Kody is reportedly dead at 57. Shakur was a notable member of the Crips gang in Los Angeles who went on to become a motivational speaker and revolutionary thinker.

News of Monster Kody’s death began cropping up on Twitter this afternoon (June 8), most especially with Vince Staples, who has ties with the Crips organization, posting condolences in honor of Shakur. Others began following suit and the news began to spread.

Shakur was born Kody Dejohn Scott on November 13, 1963, and was a member of the Eight Tray Gangster Crips in Los Angles. He earned the name “Monster” after beating up and severely injuring a robbery victim when he was just 13 years old. From there, Shakur was deeply embroiled in gang wars as a member of Eight Tray, which infamously clashed with another set of Crips known as the Rollin’ 60s.

While in prison in the 1980s, Shakur joined the Republic of New Afrika movement and changed his name. Later in 1993, he published a gripping memoir titled Monster: The Autobiography of an L.A. Gang Member. The book depicts how Shakur fell into gang culture and also highlights his growth within the New Afrika movement. Shakur also converted to Islam while housed at the Pelican Bay State Prison.

Shakur had a close relationship with the late 2Pac (AKA Tupac Shakur), mentioning this in his memoir. Shakur last saw 2Pac in 1996 while visiting the set of one of the rapper’s videos while he was on the run from police.

We’re going to update this post as details continue to pour in. For now, check out the reactions from Twitter below.