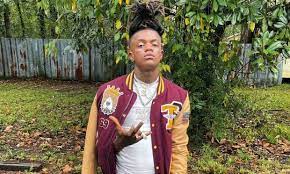 A close family member, Kenyatta Scott Sr., was also wounded but is in stable condition, Bogalusa Police said in a statement on Facebook.

Scott is a 24-year-old Bogalusa native who is known for his singles, “23 Island,” “Elimination” and “Opps.” He has a large social media presence, with more than 2.5 million followers on Instagram.

Police said they received a call about a shooting in the 600 block of Superior Avenue at 5:50 p.m. Wednesday. One of the injured people had been brought to Our Lady of the Angels emergency room. Another victim, still on scene, was critically wounded and was taken by ambulance to the OLA ER.

While working the scene at the hospital and on Superior Avenue, police said they were notified of another shooting shortly after 7 p.m. in the 800 block of Marshall Richardson Road. A vehicle was shot, but the occupants were not injured, police said.

Authorities said the two shootings are possibly related and the investigation is ongoing. Anyone with information should call Bogalusa police at (985) 732-6238.

A law enforcement source told our news partners at WWL-TV they believe the motive in the shootings was retaliation.

Police said they are “conducting interviews and working leads.” “Several” outside agencies are involved in the investigation as well, authorities said late Wednesday.

“This is a very fluid situation and the information we can release is limited at this time,” police said in a statement Wednesday. “Our Officers are working diligently to identify the subjects responsible for these crimes.”

In December, JayDaYoungan was indicted on a federal weapons charge stemming from a traffic stop in which police say they found him with marijuana and a gun.

Scott was already under indictment for a slew of felonies when police booked him in late October, marking his fourth arrest in less then a few months.

JayDaYoungan, who celebrated his birthday earlier this month, posted his first song, called “Stick Up, on Youtube in 2016 and has since grown a loyal following across several social media platforms.

He has released more than two dozen songs and has several popular singles, including “23 Island,” his most-watched video with 173 million views on YouTube as of Thursday morning.

His most recent video, “First Day Out Pt2,” was released a month ago. Other popular songs include “Thot Thot,” “Interstate,” “38K” and “Catch Me In Traffic.”

He is known for flashing cash in photos and videos, but he was charitable, according to his social media accounts. For instance, he passed out food and money to homeless people in California in 2019.