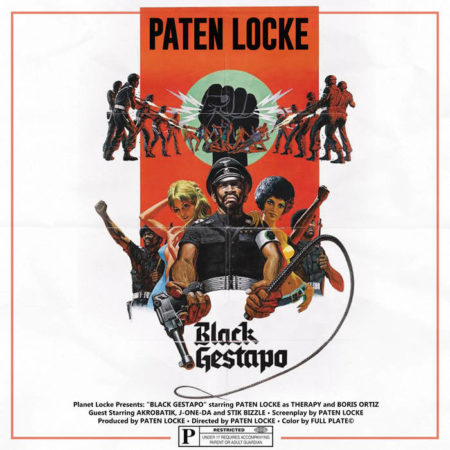 ‘Out of the wilderness…out of the night…has a Black Man crawled into the dawn of light.’

In the early 2000’s, Paten Locke aka Therapy was forging his career as a formidable triple threat. Having relocated from Boston, Paten was making waves in the Jacksonville, FL scene both as a DJ and with his rap group, the almighty Asamov. Not to mention he was doing serious damage at every local record spot with his digging crew, Little Green Apples. It was during this era in P. Locke history that he began crafting his long lost solo debut, BLACK GESTAPO.

Loosely based on the 70’s blaxploitation film of the same name, Black Gestapo is a gritty first glimpse at Paten’s skill sets as a one man army. Meant to sound like a ‘lost demo tape found buried underground’, the beats are a rugged collection of coarsely chopped records & doubled-up rare breaks (original pressings only of course) anchored by the funkiest of cuts. But the star of the show is an animated Therapy whose voice charismatically ricochets from track to track with rhymes that are at once both witty & rude; insightful & abrasive; comedic & chaotic.

Perhaps no one can explain Paten’s process better than he does on ‘The Red Line’:

On Black Gestapo we hear the makings of what the world would come to love and respect Paten Locke for as an artist: raw rhymes over well-crafted beats with razor sharp cuts to boot. And above all else this lost masterpiece is an embodiment of Paten’s mantra: “DON’T MONKEY WITH THE FUNKY”.

We hope you enjoy the film.

*All sales go to PLANET LOCKE to fund future releases