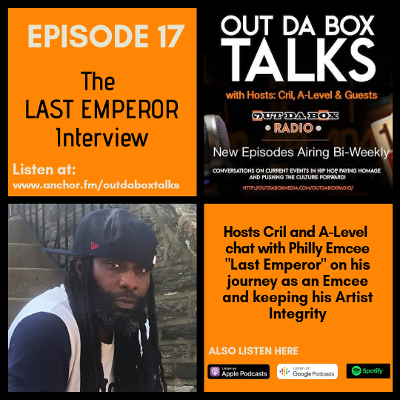 In this in depth Episode of Out Da Box Talks, hosts Cril and A Level chat with Philly Super Lyricist “The Last Emperor” about his journey as an Emcee and the beginning stages of his music career going back to his early days signed to Dr. Dre’s Aftermath, and moving on to Rawkus Records. He talks about his debut album “Music Magic and Myth” finally being released on Raptivism Records as well how the project came together. The Last Emperor talks insightfully about some of his struggles and wisdom gained through navigating through the music business while maintaining his love for the artform of lyricism in Hip Hop and keeping his integrity. He also gives us a hint into what’s next for his music career. We had the humble pleasure to have an amazing conversation with the brother and certainly hope you enjoy