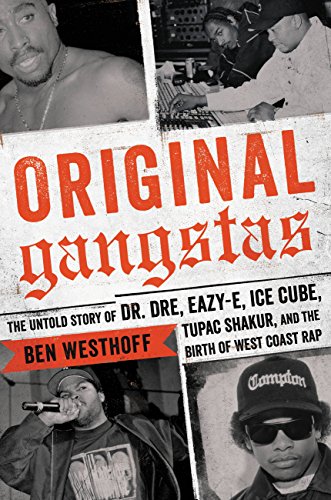 Be O.G. Enter for a chance to win a free signed hardcover of the new book by Ben Westoff: ORIGINAL GANGSTAS: The Untold Story of Dr. Dre, Eazy-E, Ice Cube, Tupac Shakur, and the Birth of West Coast Rap It’s On Sale Everywhere September 13, but you can enter to win now! 10 Copies will be awarded. ORIGINAL GANGSTAS, based on five years of research and reporting, is the definitive history of L.A. gangsta rap, revealing how a cohort of then-unknown rappers, including Eazy-E, Dr. Dre, Ice Cube, Snoop Dogg, and Tupac Shakur, grappled with rivalries, crime, drugs, gangs, racist cops and bad record deals to create the defining music of a generation. Packed with insights from original interviews with Ice Cube, Dr. Dre, MC Ren, Snoop Dogg, D.O.C., Mopreme Shakur, Ice-T, and dozens more – including rappers, girlfriends, family members, and industry professionals – Ben Westhoff’s ORIGINAL GANGSTAS is a monumental work of music history.

“I trust Ben Westhoff. I trust him to report a story and I trust him to tell a story, and that’s exactly what he’s done here in ORIGINAL GANGSTAS. He’s taken what’s always felt like an almost impossibly knotted string of storylines and plot points in gangsta rap, the most turbulent version of the most popular music on the planet, and turned them into an airtight and unflinching book. ORIGINAL GANGSTAS is as resolute as the people and ideas it sets out to profile, and that is no small feat.” -Shea Serrano, bestselling author of The Rap Year Book “ORIGINAL GANGSTAS shows how the rap West was won. A social and cultural study to read along with a head nodding-soundtrack ‘fo sho’” – Chuck D, Public Enemy

“ORIGINAL GANGSTAS is as real as it gets if you want to know the so-called ‘gangsta rap’ scene. Ben Westhoff refrains from using rumors and innuendos, and instead reports the facts, and he tells all sides of this music movement. The book goes into depth about many stories I’d only previously heard via the streets. As the first DJ to play almost everyone mentioned in the book, I found ORIGINAL GANGSTAS compelling reading. Thank you, Ben Westhoff, for this great book!” – Greg Mack, “The Godfather of Hip Hop Radio,” former KDAY DJ, current host of the nationally syndicated “The Greg Mack Show”

“ORIGINAL GANGSTAS takes readers to the source, the battered communities and difficult lives that spawned an unlikely musical revolution. Eazy and Dre, Tupac and Snoop—Westhoff admires his subjects’ music talent but isn’t afraid to expose their darkest secrets. His research is exhaustive, while his prose is concise, and the result is an unforgettable history of the last time music was ever really dangerous.” – Stephen Witt, author of How Music Got Free For more information, check out these links!