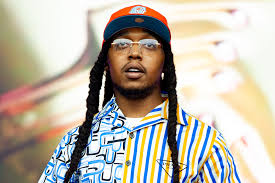 Rapper Takeoff from the Atlanta group Migos was killed early Tuesday morning in a shooting in Houston, Texas, according to multiple reports.

The shooting occurred at downtown bowling alley 810 Billiards & Bowling where Takeoff—given name Khirshnik Khari Ball—was allegedly playing dice with fellow group member Quavo and others. According to TMZ, an argument broke out over the dice game and shots were fired, allegedly hitting Ball in the head or neck. Houston police responded to the scene and reported finding one victim deceased at the scene.

Authorities later confirmed two other individuals were shot in the incident and taken to the hospital with non-life-threatening injuries. HPD stated they are not releasing the identity of the deceased until notice is given to the family of the victim and a local forensics team can provide confirmation.

Rapper Lil Pump is among the many to leave notes of disbelief and mourning on the rapper’s most recent Instagram post.

Houston’s Bun B also shared his condolences in an Instagram story, writing over a Worldstar post announcing the rapper’s death.