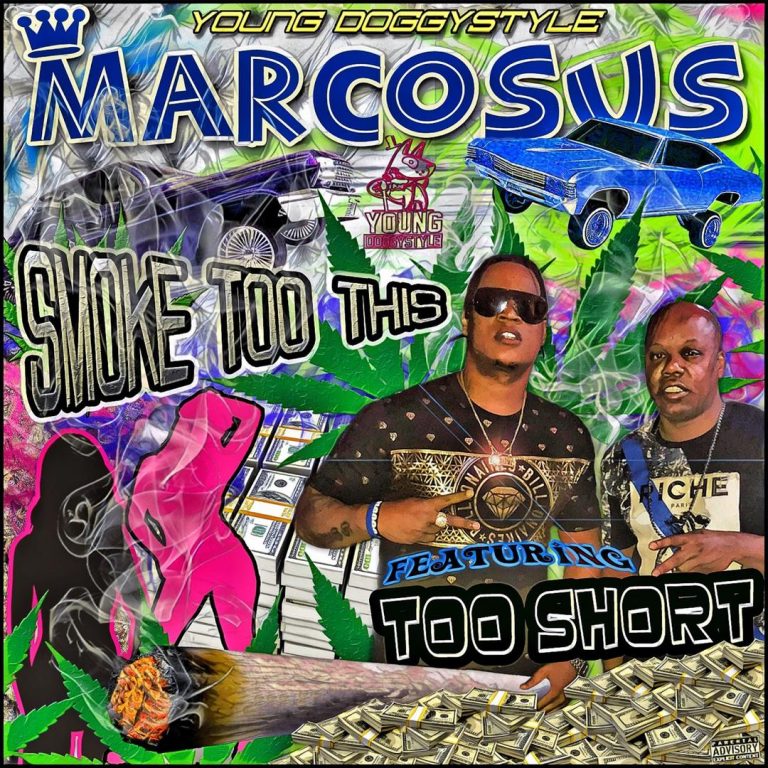 The Bay and Long Beach link up once again for another certified smash as Long Beach’s rising star Marcosus collaborates with legendary Bay Area recording artist Too Short for new single, “Smoke Too This”. A familiar West Coast summertime vibe, Marcosus and Too Short deliver smooth, calm, and creative verses that will keep the party rockin’ all night long til the early mornin’. The perfect blend of gangsta boogie and legendary bass that Hip-Hop has grown to adore from so many West Coast classics. The past, present, and future collide on the track as Too Short co-signs the greatness that is Marcosus.

Marcosus is the CEO of his own entity, Young Doggstyle Records. An imprint established in 2016 with a stamp of approval by the legend-himself Snoop Doog. Marcosus became a protege of the West Coast legend after a stellar rhymeslaying performance during Snoop Dogg presented Rap Battle. Following the performance, Marcosus opened up for Snoop Dogg’s Puff Puff Pass 2 Tour, sharing the stage with Hip-Hop legends Dogg Pound, Bone Thugs-N-Harmony, Twista, and Too Short himself. Leading to the two collaborating on the new single.

Too Short is not only a living legend in Hip-Hop, he is also one of the most longest-running hit-making recording artist in Hip-Hop history. Catalog of hits that stands the test of time that has transcended several generations from the 80’s to the present. Known for iconic essentials, “Freaky Tales”, “Gettin’ It”, and “Blow the Whistle”, like Marcosus, Too Short has co-signed countless superstars in today’s music like Wiz Khalifa, Lil B, and G-Eazy while collaborating with them on smash hits of their own. Too Short refers to Marcosus as his favorite singer.