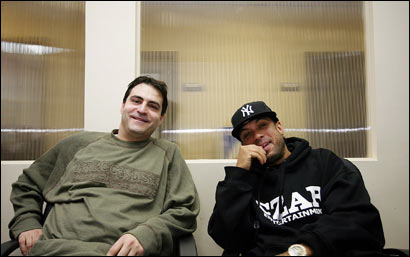 The event — which will feature exclusive interviews, select performances, a private red carpet, and a gifting suite — will be streamed live for free on FilmOn’s new platform ETV.com with all “tips” going to the charity Peace One Day.

The event at Atlanta’s Billboard Studios celebrates the launch of Hip Hop Weekly’s new website and the launch of ETV.com — a revolutionary new platform created by Greek billionaire Alki David which allows artists to monetize their performances and interact with audiences with just a laptop and a web cam. It will power the epic rap battle between Cassidy and Dizaster with FilmOn’s Battle Rap TV channel on Dec. 6.

Alki David, CEO of FilmOn Networks, which has 40 million monthly users worldwide, has embraced hip hop culture with partnerships with Suge Knight and Lush One and the 12 channels on his streaming TV service dedicated to urban entertainment including the most recent, Battle Rap TV.

“I’m excited to inaugurate ETV.com with the Hip Hop Weekly All Access Soundstage and Interview Suite,” says Alki David. “We are changing the game — putting power and money in the hands of artists and consumers.”

Hip Hop Weekly magazine, the numer one source for hip hop news and information, was founded by two pioneers of hip hop media, Dave Mays and Ray “Benzino” Scott. Mays co-founded seminal hip hop magazine The Source in 1988, with Scott joining later, and their contribution to the culture has been immense. HHW is now building on its success in print over the last 7 years to become hip hop’s dominant digital brand.

“We are proud of the amazing ground that has been broken with Hip Hop Weekly magazine in print,” says co-founder Dave Mays. “Now we’re confident our all-new digital platform will build on that success and continue to be integral to the fabric of hip hop culture.”

Sign on to view the Hip Hop Weekly All Access Soundstage and Interview Suite free at etv.com/hiphop