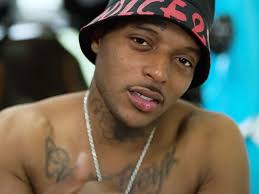 The 31-year-old, whose real name was Tristian Hamilton, was part of a group of rappers known as the “Fly Boy Gang.” Two years ago, another member of the group, FBG Duck, was killed in broad daylight on the Gold Coast

A 29-year-old woman was shot in the left arm and upper back and was taken in serious condition to Christ.

Hamilton had been driving around about 5:30 a.m., with the woman asleep in the car, when the Cadillac cut him off in the 1600 block of West 81st Street and two people got out and began shooting, according to police reports.

When officers arrived, they found 23 shell casings at the scene, including 14 from a rifle, the reports said.

Sources initially reported Hamilton grabbed a handgun and returned fire but police reports indicate he ran from the shooters before eventually falling to the ground.

Both gunmen fled in the black Cadillac. No one was in custody.

Hamilton was part of a group of rappers known as the “Fly Boy Gang.” Nearly two years ago, another member of the group, FBG Duck, was killed in broad daylight on the Gold Coast by four masked shooters who left behind 38 bullet casings.

Four members of a street gang faction have been charged with the murder of FBG Duck, whose real name was Carlton Weekly. In April, Hamilton had been asked about rumors that he was somehow involved in Weekly’s death.

In a YouTube video, Cash denied any involvement, insisting it was a “crazy internet rumor.”

Hamilton had served prison time on gun charges several years ago and had been arrested again last year after police said they found a gun after stopping Hamilton for driving erratically.