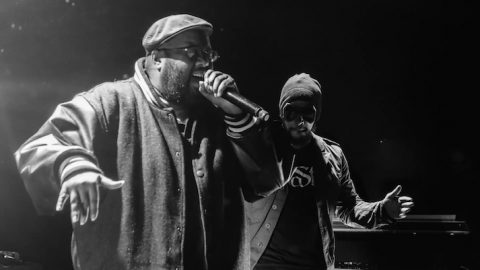 Gift of Gab, of the Sacramento group Blackalicious, is set to undergo a kidney transplant in a few weeks. After years of treatment, the Mayo Clinic in Arizona informed him that he would receive a transplant before March. In preparation for the recovery process, he’s launched a GoFundMe campaign for assistance. The goal is currently set at $8,000. In exchange for donations, Gift of Gab is offering a free EP called Offering.

Donate to the GoFundMe campaign here.

WATCH: Gift of Gab Reveals How His Health Troubles Inspired Blackalicious’ New LP in New Doc Short
“I am reaching out to my fans and people in general with this GoFundMe because once I get the transplant it’s going to be costly,” he says on the campaign page. “I will have to pay to put myself up in a hotel close to the clinic for up to 6 weeks.”

Gift of Gab has been in dialysis for four sessions a week since 2013. The sessions last between three and four hours each.

“I need to bring a caregiver out, rent a car, buy food,” Gift of Gab added`. “Not to mention I can’t work for six weeks and bills and rent at home don’t stop. Reaching out to all to help me get thru this.”

Blackalicious formed by Gift of Gab and Chief Xcel at the University of California, Davis in 1992. Their third studio album, 2005’s The Craft, peaked at number five on Billboard’s US Indie album charts. Throughout their career, Blackalicious has collaborated with notable artists like Questlove, Zack de la Rocha, and Gil Scott-Heron. In 2015, they remixed their song “Alphabet Aerobics” in collaboration with Bleacher Report