Bizarre Drops His Latest Project “He Got a Gun” 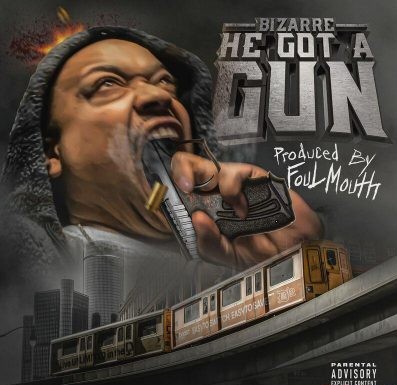 Detroit legend Bizarre of the infamous D12 is known for his crazy lyrics, wild sense of humor and trademark flow. Bizarre has teamed up with Detroit Producer Foul Mouth to create a new album “He Got A Gun”. The First time Bizarre went into Foul Mouth’s filthy basement to listen to beats, the surroundings of the studio and the crazy sound banging out of the speakers rejuvenated Bizarre in a way that took him back to his roots when he first started.  After 20 years on top in the industry, Bizarre had lost the love for hip hop. On the new ” He Got A Gun”  Album,  Biz comes heavy with the wit, the crazy, but most importantly the creativity and passion that made him so beloved. With Foul Mouth’s Grimy Detroit sound, You hear Bizarre taking it back to the underground with the vintage Bars and crazy punch lines . Special guest appearances by Kool Keith, Ty Farris,  Guilty Simpson, Dango Forlaine, Seven the general, Nems, Young Zee and more. This is the masterpiece we’ve all wanted from Bizarre, “He Got A Gun”