Rapper X-Raided to be Released from Prison after 26 Years

After serving 26 years in prison for his role in a 1992 gang- related homicide committed when he was a minor, Anerae Brown will be released from Richard J. Donovan Correctional Facility on Friday, September 14, 2018.

Brown, recording under the stage name X-Raided, released his debut album Psycho Active in 1992 on Black Market Records. A member of Sacramento's notorious 24th Street Garden Block Crips, a seventeen year old Brown was charged in 1992 and subsequently convicted of first degree murder in 1996. He was sentenced to 31 years to life.

Brown continued to release music despite his incarceration, becoming the subject of stories in the Sacramento Bee and Los Angeles Times, as well as having articles written about him in publications such as Playboy, The Source, and Vibe. Brown's project The Unforgiven Vol 1 is considered a classic rap album according music critics. Brown has been described as "one of the most underrated rappers ever" by Genius.

Brown had many ups and downs during his incarceration, including a failed attempt on his life that was captured on camera and posted online.

Brown became a positive force in prison, making donations to charities and supplying music equipment for the music program on Echo Facility at RJDCF. He has also worked with Tender Loving Canines Assistance Dogs' POOCH program, advancing to the level of mentor, facilitating groups and instructing other prisoners on how to train service animals for wounded warriors and children with autism.

On May 1, 2018, Brown, who qualified as a youth offender under penal code 3051, was found suitable for parole by the Board of Parole Hearings. On September 4, 2018 the BPH was notified that Governor Jerry Brown would take no further action in Mr. Brown's case.

Brown is currently the subject of a project being filmed by producer Scott Sternberg of Scott Sternberg Productions. Brown will continue to serve as a member of the Offender Administered Rehabilitative Services committee co-founded with Lyle Menendez and others. They are currently working on a variety of restorative justice programs with Professor Allen Mobley of San Diego State University's Project Rebound.

"I'm looking forward to spending time with my family," said Anerae Brown. "I have a lot of new material coming. This is a huge blessing. I'm ready to get to work."

dope as fuck! I'm happy for this man!
Props: StillHustlin

Yup paid his debt to society! 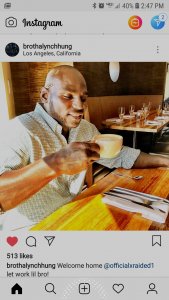 It would be dope to see him start up ah youtube channel and do vlogs and shit, atleast hed get a nice handful of cash from youtube cuz I'm sure ALOT of ppl would subscribe to him and watch all his videos. Just my opinion of ah good idea.
Props: infinity

^Its a great sight bro!
Props: phncke and infinity

i really want to know how Dott Dogg did this

FAKE ASS WANNA BE Now I KNOW You As THEE "TED BOWLES" FAKEZ Of HOEZ GRABBER He Man Club HATER OF THE WOMEN DOWNTOWN AROUND AND BACK DOWN YOU ASS WILL BE, YOU HOE ASS NIGGUH, FAKE ASS GANGBANGIN ASS FAGOT. NEFARIOUS STILL I NEED TALK WITH YOU, YOU TRIED MY GRABBING MY WILL TO GRAB ON BITCHES DICKS, AND FAKE THAT BITCH, I KNOW YOU HAVE FAGGOT IN YOU STILL, YOU CAN'T CLAIM SUPERIOR OG GROMPTON I CLAIM OG SUPERIOR CRIPT OF THE UNDERLAIR IN THE GROUNDZ I STAY, I AM THEE MUTHA CRIP KEEPER, AND THAT IZ MY SHOW, I KNOW YOU BEEN FAKING BEING FUNNED UP THE BUTT, EVERYONE SENSES YOUR GAYNESS, YOU QUELPT AS QUIET LIL ASS TOUMBLE ASS BITCH HOE FAGGOT, LEAVE ME ALONE IZ THE FIRST REPLY

HERE HERE'S MY PICTURE, GHEAVAKA iz the name and impin on the PO PIMP SELM looks the def of most matted down afrales in the african hood, seenly i saw you as someelse in jail now i wonder really where they put you, looks like you was eatin stromes and prompets in the hood watching people go to jail, you lucky if you can sign on with so many temptations you have would your way off the gangstar map i want to buy your bloccstar records before you ruin that too.

NIGGUH HOW MUCH IS YOUR RECORD CO. WORTH I WANT TO TELL ON DAT TOO. YOU BUMBLE BEE YOUR MONEY TOO YOURSELF, MY RECORD COMPALY ITSELF BACK OUT, I"M WORTH TWO CENTS NOW WHAT'S YOUR WORTH, YOU PEE"D ON MY DICKIES AND DEFOCATED ON MY BRASS NICKLES AND CRAPPED ON MY DIMES, YOU TELL LIKE I KNOW WHAT HAPPENS WHEN PEOPLE HAVE TOLD TOO MANY LIES, I BEEN BACKING YOU NOW I KNOW YOU CRAPPY, WE CALL YOU "CRAPPY PANTZ IN THE HOOD" CuZ YOU BETTER BE SCARED.

I DON'T YOU HOEZ & I SURE DON'T LOVE YOU NIGGUHZ BUT SURELY I DON'T LOVE YOU NIGGUH, YOU ARE A ZAPP OFF A CAMERA AND I HOPE YOU REGULATOR YOUR WAYZ BACK INTO THE HOOD, YOU LOOK LIKE YOU WENT JC PENNY'S AND BOUGHT YOUR FIRST GEAR TO GAMPIN IN THE HOOD, LOSE YOUR WAY OFF, YOU CAN'T CAMP WITH OG'Z LIKE THAT, GET YOU SOME WET PANTIES AND PUT THEM ON A GRAB YOUR NUTTS AND TUCK EM IN YOUR TAIL AND CALL OFF ANY BEEF WITH THE WHOLE WORLD OR GHETTO PIMPS ALIKE LIKE ME, THERE IS A WAY OUT YOU FAMMY PAMMY MUTHA FUCKA, ONLY I KNOW HOW MUCH T.A TIME YOU WILL DRESSED LIKE THAT IN A HOME WITH NO VERDICT BITCHES JUST TRAMPS AND PLACES TO HIDE.

I WAS J/P HE REPS HIS SQO IN PAGS, HE'S A LABOMIET BITCH FAGGOT BIKER